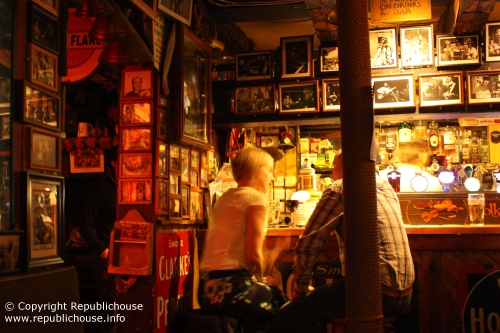 Sitting by the front bar counter, you’ll be surrounded by more pictures than pints!

Music at the core of ‘Clon’ & De Barra’s

This famous quote from the equally famous Irish folk singer & songwriter Christy Moore, somewhat gives the game away as to the secret of De Barra’s success. Situated on the central stretch of Pearse Street in the colourful town of Clonakilty, County Cork (or ‘Clon’ as it’s known to the locals), De Barra’s holds pride of place among the town’s renowned live music scene. Even before you cross the threshold of this charming pub, you are reminded of its musical heritage, given the stone plaque at the foot of the entrance doorway which states; ‘Noel Redding 1945-2003 Bass player with The Jimi Hendrix Experience played De Barra’s for over 20 years.’ This is indeed true, Noel being the most cherished of the many talented musicians to have frequented and performed at De Barra’s since its reinvention as a live music venue in the early 1980s. As you step into the front bar, the first thing you notice is the range of musical memorabilia adorning the walls. To your left, the white stone fireplace is decorated with musical instruments including a banjo, violin, bodhrán and a saxophone to name a few. Each of these instruments carry real history and authenticity, not least the set of Uileann pipes just to the right of the fire, which were played by Barney Delaney from Tullamore at the 1893 World Fair in Chicago. Delaney was regarded as one of the finest pipers of his day. And so the scene is set…you are in not just in a great pub; rather you are in ‘De Barra’s Folk Club’.

Angelika by the fire and what a fine mantelpiece those instruments make!

With any luck you can get a seat in the front bar near the open fire, either by perching on the adjecent bench seats or by drafting in the nearest available old stool. As it was, on our most recent visit of an early afternoon, Angelika had the edge of the bench seat by the fire and I dragged a stool across to sit facing Angelika and a lovely, crackling fire. From here you can peruse the gallery of music-themed photos, instruments and artefacts. Chief among these are mementos gifted to De Barra’s by former town resident and pub regular, Noel Redding, from his time playing in The Jimi Hendrix Experience in the late 1960s. So there is in situ on the walls the fender jazz bass guitar that Noel used when in the band, plus an eye-catching double platinum record of ‘Are You Experienced’, their debut album. It is a credit to Eileen Barry (daughter of the bar’s family) and her husband Bobby Blackwell (a former heavyweight boxer), that since their taking shared ownership in 1980, they achieved two things remarkably well; i) maintaining much of the bar’s originality and ii) simultaneously transforming a once standard drinking establishment into a vibrant live music venue. In terms of originality, the red floor in the front bar is said to have been laid by Polish workers during the Second World War. The front bar also has a cosy corner snug, which has a view to the street plus easy access to the main bar counter. Looming large in this snug is a framed collection of newspaper clippings relating to the sinking of the Lusitania cruise ship in 1915 by a German U-boat.  Compelling among these is one headline recording, “Death List Now 1,457”, sitting side-by-side with a call-to-arms for local Irishmen, “Irishmen Avenge The Lusitania; Join An Irish Regiment Today.” The snug is covered in pictures and signs, as is the case throughout the pub, and includes a framed picture of the historic Irish revolutionary leader and politician, Michael Collins. Collins was a leading figure for the struggle for Irish independence early in the 20th century, until his assassination in 1922. Michael was born near Clonakilty and is regarded as the town’s most famous son. The wooden bench seat and tongue and grove wooden panelling on the walls make the snug an ideal spot to take the weight of your feet and to enjoy the surroundings. 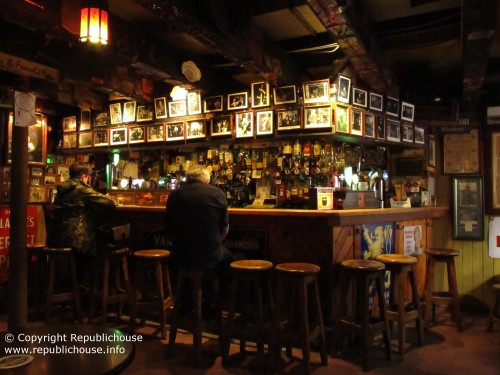 The front bar counter with snug just to the right (out of picture), as daylight pours in

From the kitchen to the Folk Club

The originality continues as you pass through the front bar and into the old kitchen, where Eileen and her family would have had breakfast in her youth. A Bonnybridge Dover cast iron stove by Smith & Wellstood Limited is still in place, showcasing the cooking technology of the day. On one visit, we sat in a lovely corner just by this stove, watching a traditional seisiún (or ‘session’) kick off in the front bar, while others performed a sound check in the back bar, readying for a later performance. There is seldom a lack of a musical soundtrack on a visit to De Barra’s, and of course that is part of its charm. Across the room, an extensive collection of masks from across the globe line the walls along a wooden staircase, exuding a sense of new world adventure and exploration. This is apt, given that the kitchen links the front bar, which is testimony to the pub’s past, to the back bar and auditorium (effectively the ‘Folk Club’), which is the modern day embodiment of the pub’s worldly role as a key live music venue. In the back bar, music-lovers congregate on old church benches to watch live acts visiting from the far corners of Ireland and beyond, or to see local troubadours such as John Spillane, who has hosted a monthly residency here since 2001. Other performers over the years have included Villagers, Sharon Shannon, Roy Harper, Bell X1 and of course Christy Moore and Noel Redding. A large hole in the ceiling allows an entire extra floor of audience members to gaze down at whatever talent is on stage on any given night. Particularly theatrical among events are the Wednesday night ‘Sitting Room’ gigs where singer songwriters perform in intimate stage surroundings which include a sofa and standard lamp! De Barra’s really does have that homely feel!

The view from the kitchen through to the front bar

Of life is quicker

Than the wink of an eye

The story of love

Is hello and goodbye

Until we meet again”

Our visits to ‘Clon’ may be infrequent and often all too short, but as long as De Barra’s is maintaining the true spirit of the Irish Pub and the life and soul of the Irish music trail, it is always just a matter of when we ‘meet again’. If we are in or near Clonakilty, we’ll be in De Barra’s. Guaranteed. Until the next time…. 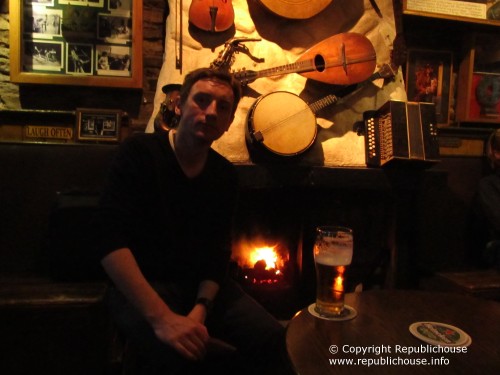 Possibly one of the best seats in any pub in Ireland!

A statue of Michael Collins, known as ‘The Big Fella’, is located near De Barra’s pub

(i.e. 1980 as in current guise, although a ‘pub’ has been noted to have stood on this spot from as early as over 100 years ago, formerly as a traditional grocery pub)

Visit because: Many pub-goers in Ireland, both of the regular and tourist variety, are attracted to pubs by their musical legacy and current day gigs or sessions. In that regard, De Barra’s is among the best on offer in Ireland, showcasing musical memorabilia, impromptu traditional sessions and full-on live n’ loud stage performances in its dedicated Folk Club to the rear. Come on down; feet will be a tappin’ …

Food served? (Yes/No): Yes, lunch is served from Monday to Saturday, from noon to 4pm. Toasted sandwiches, baked potatoes, chicken goujons and sausage rolls list among the casual pub-grub on offer that is sure to keep your hunger appeased just in time for the next pint.

Drinks price check: A pint of lager plus a pint of Guinness came to €9.20 on our most recent visit (October 2015).