O’Donoghue’s is our go-to pub. There, I said it, there’s no mystery to it. Rail, hail or shine, no matter what the occasion, O’Donoghue’s can cover it. It’s not the prettiest, the most comfortable nor the most steeped-in-history of Ireland’s pubs but by god, it is one damn fine boozer. If you’re looking simply to pop in somewhere for a drink over the newspaper or while catching the match on T.V., O’Donoghue’s is ideal. If you’re peckish, the guys there will whip up a toasted sandwich for you. If you’re after a proper, full-on night out among a lively, mixed crowd, O’Donoghue’s guarantees it, with a bustling, varied clientele heaving all the way from the old bar on one side, through the beer garden across to the newer part of the bar. There’s even table service (dangerous!!), which is a nice touch given the often hectic efforts involved in getting served when the place is really packed. It’s safe to say that for one reason or another, Angelika and I are in the place at least once a month, and always at Christmas when O’Donoghue’s plays the role of a sensible Pub No. 12 on The 12 Pubs of Christmas pub crawl, whereby its easy access to the beer garden, simplifies getting a large, wobbly-legged crew served and set up for the remainder of the night. On top of all that, the best trick in O’Donoghue’s repetoire is its live music.

A young Paul Brady & Co. (centre bottom) is pictured surrounded by an array of images of Irish music greats, past & present

If there’s one thing above all else that O’Donoghue’s is synonymous with, it’s music, and more specifically Irish music. Musicians that have shaped traditional and contemporary Irish music have entertained patrons live in O’Donoghues over the years and are suitably remembered in a multitude of pictures adorning the walls throughout the pub. A cursory glance throughout this musical hall of fame recalls Irish music talents including Christy Moore, Phil Lynott, Tommy Makem, The Clancy Brothers, The Fureys, Joe Heaney, Seamus Ennis, Paul Brady, Planxty and of course The Dubliners & Ronnie Drew, with whom O’Donoghues is most notably associated. The Dubliners’ career emerged from the sessions held entertaining the drink-swigging folk of O’Donoghues as far back as the 1960’s, and they are certainly the poster boys of the pub’s fine musical heritage; their image everywhere to be seen in a range of pictures throughout the pub. A framed copy of an Irish Press front page from 1987 shows The Dubliners teaching (now former Taoiseach) Bertie Ahern a few chords, while there’s a colourful caricature of the band from a pub in Berlin, to name just a couple of examples. The live music vibe continues to this day, with traditional music sessions in the pub seven days a week. The round, high-backed seat in the alcove by the front window is the altar upon which traditional musicians ceremoniously slink in, set up and strike up a traditional tune or two each evening from 9pm (or earlier on Sundays), having requested those occupying these seats to move aside. Tourists are as perplexed to be dumped out of the comfort of these window seats as they are subsequently delighted to be entertained, albeit needing to stand for the priviledge. Regulars know the score, and don’t even have to be asked. In this bar, musicians are the V.I.P.s, not the customers. Proper order too. 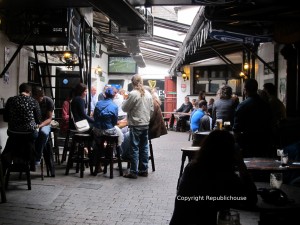 Inevitably the best pubs all have one common trait and that is that the crowd the pub attracts is as diverse as it is interesting. Long story short, O’Donoghue’s attracts all sorts. It gets the suited folk of the nearby office blocks and government buildings, students from the city centre’s third level institutions, eager tourists from every corner of the world, music lovers, girls-night-out gangs dressed to the hilt, lads on the look-out, rugby fans, couples (both of the settled and ‘dating’ kind),  elderly gents, moon-lighters, passers-by, you name it. One recent visit summed it up perfectly. We overheard three gentlemen casually discussing the relative merits of contenders for the upcoming Gaelic Football Championships. “I don’t see anyone beating Dublin. Not this year…“, said one man to his two sharp-eared friends. “Mayo will be there or thereabouts…“, responded another. Meanwhile, right next to them, a rowdy work crew of about ten people were racing through their rounds of drinks like there was no tomorrow but that’s O’Donoghue’s for you; full of contrasts.

Angelika in the original no nonsense old front bar, which is spartan but charming

O’Donoghue’s was opened in 1934 by Paddy and Maureen O’Donoghue and its black slanting ceiling, grey slab floor and aged wooden panelling attest that little has changed in the old part of the bar since then. There’s an entirely new side to the pub decorated in that comfortable, re-antiquated style typical of good Irish pubs but it’s the original bar that carries the charm. The pub has changed ownership only twice since opening, in 1977 and 1988. Its 1930’s vintage places it as relatively young in comparison with other fine, traditional pubs of Ireland but of course it is still old by international standards. Licensed premises serving alcohol are known to have stood on the very spot of O’Donoghue’s since 1789, so its pedigree runs deep. Its location on Merrion Row just off the corner of St. Stephen’s Green in the heart of Dublin has perennially ensured a steady stream of customers looking to quench a thirst. The pub wears its vintage easily. Old mirrored partitions along the front bar and artefacts of geniune antiquity hint at a bygone era but are mixed with neon strip lighting, odds n’ ends and defaced bank notes. U.S. Dollar bills have been signed by folk from Chicago, Notre Dame, Boston & West Virginia, to name a few, and are pinned in a disorderly manner all around a particularly referential portrait of the Dubliners. That’s part of the pub’s unique character in that it doesn’t take itself too seriously. Oh, and the Guinness is of the highest standard too, which is another factor in O’Donoghue’s ongoing popularity. On our most recent visit, we popped in for a pint of lager and a Jameson 12-year old whiskey, which came to about €12 altogether; a small price to pay for a chat & time-out in a cosy corner of pure Irish pub gold.

Another traditional music session kicks off in the front window seats, as is the daily ritual 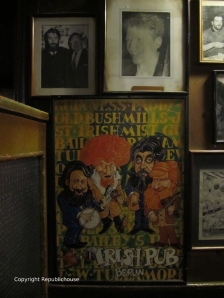 (except photo of us both outside, taken by Veronika Appelqvist)

Visit because: It’s the birthplace of world-renowned ‘The Dubliners’ folk group and continues to be a mainstay of great live Irish music to this day, with live music 7 days a week.

Food served? (Yes/No): Yes, toasted sandwiches only mind you! They are the perfect companion for a pint though.

One response to “O’Donoghue’s, A True Dubliner”